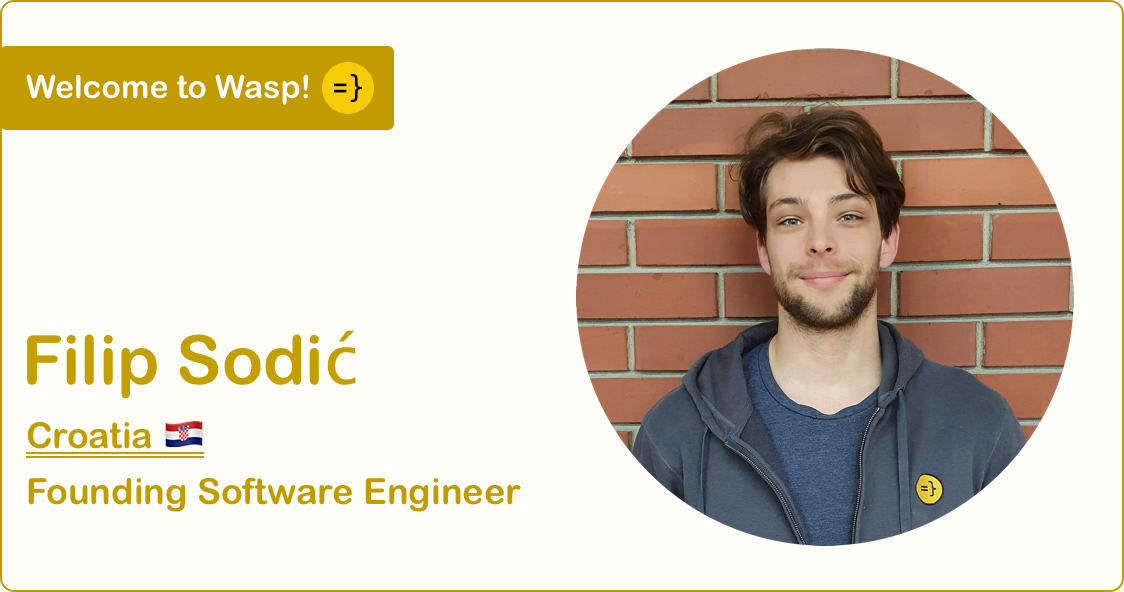 We are immensely excited to welcome Filip, our latest Founding Software Engineer! Filip is an experienced engineer and a passionate computer scientist - his two biggest passions are building compilers/designing programming languages and web development (what a lucky coincidence, right? ;)). Before joining Wasp, Filip earned his stripes in various domains, ranging from bioinformatics and the betting industry to route optimisation software. Welcome to the team, Filip - we can't wait to see what you build!

Let’s start with two truths and a lie about yourself.​

Which statement was the lie above? Any interesting stories to share?​

I did design a programming language. It is Turing-complete but still far from being practical. For one, it can’t print stuff to the screen (or perform any other side effects).

I never did buy that drink. He’s not letting me forget about it, though.

Why did you join Wasp? What did you do before?​

I've wanted to work on a project where I'd get a chance to design a language and build a compiler for quite some time now. While I did develop my own language on the side (and even graduated with it), I thought getting paid for doing something similar this early in my career was pretty far-fetched.

Almost all my paid work had something to do with the web, whether on the client-side or the server-side. I enjoy nearly all parts of web development (yes, even styling websites with CSS :), but one thing I've always found annoying was dealing with all the boilerplate. Whenever I start building something, I spend most of my time implementing the same repetitive stuff (e.g., authentication, databases, SPA routing, API routes, etc.) and relearning all the best practices that come with it.

And then, one day, a friend of mine mentioned Wasp - a DSL aiming to eliminate boilerplate from web apps. The product was a perfect fit based on everything I know and want to do! Also, I shared a college advisor with the founders (Martin and Matija) and only heard great things about them.

The whole thing sounded almost too good to be true, so joining them to work on Wasp was an easy decision.

What is your favorite language?​

I don’t have many favorite things, especially when it comes to technology. After going through several cycles of falling in love with a language/framework/tool before becoming annoyed by its shortcomings and limitations, I made peace with the fact that everything’s a tradeoff. I’ll generally choose a language depending on:

With that said, I'm currently most excited about properly learning Haskell. It always looked interesting and exotic. I've gotten a few opportunities to play with the language through university courses and on my own but never really had an excuse to use it in my day-to-day.

From a developer’s perspective, I’m definitely most excited about designing the DSL and working on the compiler.

From a product standpoint, I love the idea of never again having to implement an authentication system.

What’s a feature or project you’re most proud of that you worked on in the past three months?​

I enrolled in computer science college and first started programming as a part of my regular “Introduction to programming” course.

Before then, I didn’t really know what programming was. In fact, I wanted to study electrical engineering. Unluckily for most but luckily for me, our college does not let you choose your major (i.e., electrical engineering or computing) right away. Instead, they make you go through a shared year of universal (and some not-so-universal) courses, only allowing you to specialize at the start of your second year. Thanks to this quirk, I had a chance to encounter programming, change my mind, and enroll in computer science.

As far as hardware goes, it’s pretty basic. I use a regular laptop that’s starting to show signs of age (ASUS N550JX), a cheap Lenovo mouse, and my laptop’s integrated keyboard.

The software setup is a bit more interesting. I’m usually on Manjaro Linux with the i3 tiling window manager. I jump between editors depending on what I’m doing. It’s sometimes Vim, but mainly something more powerful that comes with Vim emulation (e.g., VS Code or JetBrains IDEs). My preferred shell is zsh (sorry Frane).

What is your current favorite gem, library, tool, or anything else that helps you with your work? Why?​

That would have to be ranger!

Ranger is a terminal file manager I use daily, mainly because it makes my work in the shell much faster. It also gives me a consistent interface for moving around, previewing files, and interacting with the file system. In other words, my workflow doesn't have to change much regardless of where I am (Mac, Linux Desktop, or Linux server).

One piece of advice you’d give to budding developers?​

It’s easy to get stuck in an endless loop of polishing and fine-tuning your projects because you think they aren’t ready yet. Good enough sometimes truly is good enough and things can often be considered done before you consider them done.

I still occasionally need to give this advice to myself :).

Lastly, where can people find or connect with you online?​